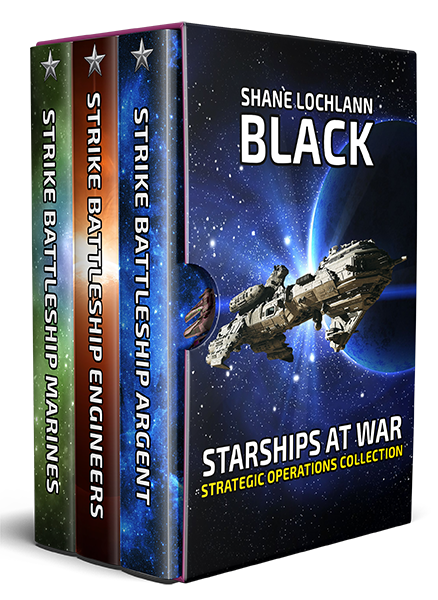 What are readers saying about Shane Lochlann Black's Starships at War?

They gave him the newest and most powerful battleship in the fleet. Then they tried to kill him. Now it's war.

Skywatch Command is well aware Gitairn is a powder keg and that Argent might be the match. When a sentinel planetary defense battery and surrounding minefield are discovered in an asteroid field where no human should be, Hunter is forced to call in reinforcements led by his twin sister Commander Jayce Hunter and her advanced battlecruiser, DSS Fury.

Before long, Argent is leading a 12-ship task force against enemy capital platforms ranging from heavy battleships to fleet strength carriers. Hunter's best marines, gunships, bombers and fighters will be put to the ultimate test against space pirates, interdimensional aliens, saboteurs, carnivorous insects, ghost ships, paranoid officers and a mysterious enemy so alien even its allies can't understand it.

DSS Argent corvette Copernicus One is down on the surface of Bayone Three. With her boat's crew missing, life support failing and most onboard systems damaged, Chief Engineer Yili Curtiss must use all her scientific and tactical knowledge to restore functionality before the enemy locates her crash site.

Meanwhile, with the entire crew of the orbiting battleship Argent also missing, a Sarn Invector destroyer squadron on the warpath and ominous readings coming from an abandoned planetary defense base near a civilian settlement on the planet, Lieutenant Commander Rebecca Islington, skipper of the escort frigate Minstrel, may be the only officer who can prevent the capture of a Skywatch capital ship.

Now, with the very fabric of space itself unraveling, a formidable enemy army pouring out of the Bayone Three defense base, and Jason Hunter forced to enlist the aid of the Condor Pirates and fugitive privateer Captain Cerylia L'Orleans, it is up to an enigmatic Skywatch Marine Intelligence officer, Jayce Hunter's refitted Perseus Task Force, a battalion of 19,000-ton superheavy Razorback tanks and a malfunctioning Tarantula-Hawk gunship and its unlikely pilot to battle their way across Gunfighter's Quarry and learn the impossible secrets of the traitorous Colonel Atwell's dangerous plan to alter the destiny of the human race before it's too late!

The Sarn are coming.

Whatever devil's bargain the traitorous Colonel Atwell struck with the cold-blooded alien massacre fleet lurking somewhere beyond the Kraken Nebula is about to reach its destructive conclusion. Skywatch Command is now outgunned and out of time, and Captain Jason Hunter's battered and casualty-ridden strike fleet faces a terrible choice.

Only the perilous spacehead established by Argent and the battle-hardened officers of Task Force Perseus at Bayone Three gives the defenders of the Core Systems a chance. They must marshal a counter-offensive before civilian worlds fall under Sarn weapons, but Marine Section Chief Major Darya Komanov knows opposing forces are strengthening and supplies are running short. This time even her company of superheavy Razorback main battle tanks may not be enough to hold the line and protect Starhaven.

Meanwhile, an unexpected surprise encounter between elements of a Skywatch expeditionary force attached to Assault Squadron 808 and an unidentified screening picket protecting a hidden heavy manufacturing facility in the contested Prairie Grove system sets off a savage running firefight that opens three fronts in a shooting war that threatens to engulf the entire Gitairn region.

Now, with fifteen battlegroups threatening populated systems, a full division of alien mechanized infantry falling out of the skies over Bayone Three and reports of an inter-dimensional insectoid hive growing out of the core of Hallows Moon, all that stands between mankind and enslavement is the deadliest weapon in space: