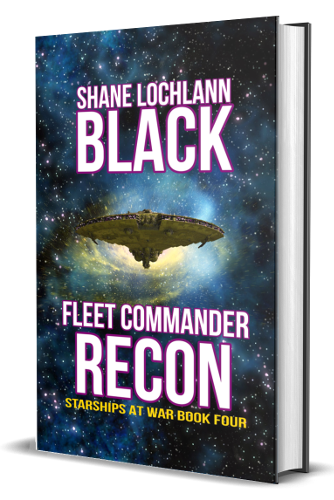 "I took an oath, colonel. My command. My responsibility."

DSS Fury is grounded by order of Skywatch Command. The majority of the battleship Argent's firepower is gone, and the Judge Advocate is preparing a defense against the possibility of a general court martial aimed at the remaining Perseus skippers and the rest of Admiral Powers' so-called "alarmist" political allies.

Meanwhile, with Jayce's mentor Commander Patrick Enright in a coma from which he may never awaken, the young captain blames herself. But there is little time for recriminations. Jayce must hunt down the ambush fleet responsible for the destruction of the starship Revenge.

As the commander battles her own worst fears, she pushes her authority to the limit and re-classifies her command Skywatch Special Forces Recon. Now all she needs is a team willing to share the risk of piracy and insubordination charges to return to Bayone.

There Hunter's renegades may finally discover the secrets of the mysterious Ithis technology and use it to learn the true fate of the one man who can beat Colonel Atwell at his own game.