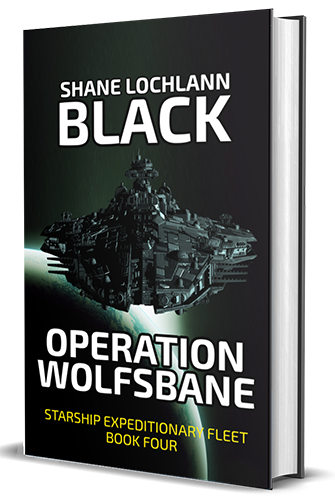 The captain of the Argent faces annihilation 40 light years from home!

Jason Hunter has never been a believer in last chances.

But the unexpected buildup of enemy forces in eight star systems places the battleship Argent squarely in the crucible between a safe return to sanity and a war that could leave nothing behind but a thousand irradiated planets and the screams of their former inhabitants echoing in eternity.

The news from Mycenae Ceti Four is grim. After the disappearance of Shea Eileen Baines, rumors swirled. Some claim she is dead, assassinated by an ambitious Sarn warship commander in a failed abduction attempt. The Argent search and rescue team sent to retrieve her is now also missing. There could be no better justification for her father, Core Alliance president William Baines, to launch a military strike. A Sarn massacre fleet of more than 120 starships waits impatiently in the neighboring Gaelphos system for him to make such a mistake.

Meanwhile, Skywatch has begun its own buildup. The legendary fleet carrier Song of Heaven has mobilized along with the battleships Constitution, Ireland, Cristobal Vasquez, Bushido, Kingsblade, Midway and Kentucky to establish a battleline spanning three star systems. The newest and most advanced F-90 "Superjack" strike fighters have been deployed aboard the Rigel and Syren and an entire division of Razorback superheavy main battle tanks have been moved to forward positions supporting twenty thousand infantry marines and two dozen assault mech regiments deployed to protect vital manufacturing facilities in the contested Rho Theta system.

The Proximan Kingdom has already entered into a mutual protection treaty with the Core Alliance. Vessels from the Kraken Decarchy have fired on Skywatch starships to protect Sarn formations. Even the Yersian Unity has issued uncharacteristic threats. And yet, with all of known space gearing for a disastrous conflict, an unidentified alien race has left behind a mystery: Weapons so advanced, they can alter the very laws of physics.

The clock is ticking. Jason Hunter is out of time. He is 40 light years from home, and 100 billion lives depend on what his ship does next. He must complete his mission before he receives the dreaded order that will lead to interstellar war: