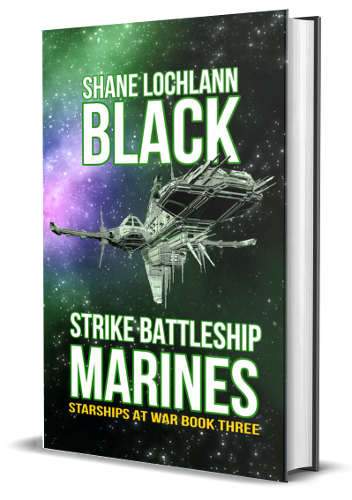 ...but they ran like cats on a tile floor when they heard the war cry of the first Skywatch marine."

The Sarn are coming.

Whatever devil's bargain the traitorous Colonel Atwell struck with the cold-blooded alien massacre fleet lurking somewhere beyond the Kraken Nebula is about to reach its destructive conclusion. Skywatch Command is now outgunned and out of time, and Captain Jason Hunter's battered and casualty-ridden strike fleet faces a terrible choice.

Only the perilous spacehead established by Argent and the battle-hardened officers of Task Force Perseus at Bayone Three gives the defenders of the Core Systems a chance. They must marshal a counter-offensive before civilian worlds fall under Sarn weapons, but Marine Section Chief Major Darya Komanov knows opposing forces are strengthening and supplies are running short. This time even her company of superheavy Razorback main battle tanks may not be enough to hold the line and protect Starhaven.

Meanwhile, an unexpected surprise encounter between elements of a Skywatch expeditionary force attached to Assault Squadron 808 and an unidentified screening picket protecting a hidden heavy manufacturing facility in the contested Prairie Grove system sets off a savage running firefight that opens three fronts in a shooting war that threatens to engulf the entire Gitairn region.

Now, with fifteen battlegroups threatening populated systems, a full division of alien mechanized infantry falling out of the skies over Bayone Three and reports of an inter-dimensional insectoid hive growing out of the core of Hallows Moon, all that stands between mankind and enslavement is the deadliest weapon in space: