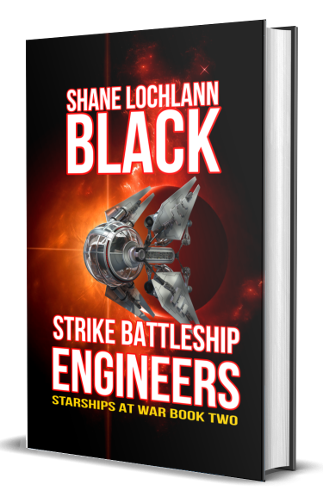 When all hell breaks loose, who does the captain call first?

DSS Argent corvette Copernicus One is down on the surface of Bayone Three. With her boat's crew missing, life support failing and most onboard systems damaged, Chief Engineer Yili Curtiss must use all her scientific and tactical knowledge to restore functionality before the enemy locates her crash site.

Meanwhile, with the entire crew of the orbiting battleship Argent also missing, a Sarn Invector destroyer squadron on the warpath and ominous readings coming from an abandoned planetary defense base near a civilian settlement on the planet, Lieutenant Commander Rebecca Islington, skipper of the escort frigate Minstrel, may be the only officer who can prevent the capture of a Skywatch capital ship.

Now, with the very fabric of space itself unraveling, a formidable enemy army pouring out of the Bayone Three defense base, and Jason Hunter forced to enlist the aid of the Condor Pirates and fugitive privateer Captain Cerylia L'Orleans, it is up to an enigmatic Skywatch Marine Intelligence officer, Jayce Hunter's refitted Perseus Task Force, a battalion of 19,000-ton superheavy Razorback tanks and a malfunctioning Tarantula-Hawk gunship and its unlikely pilot to battle their way across Gunfighter's Quarry and learn the impossible secrets of the traitorous Colonel Atwell's dangerous plan to alter the destiny of the human race before it's too late!