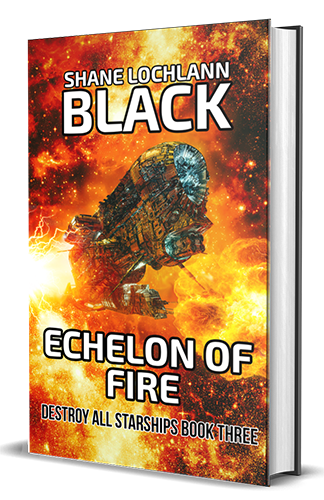 You may think you've experienced action-packed sci-fi before, but you had better strap in, because Echelon of Fire has all weapons on overload, and it is set to attack on August 18th!

Skywatch thought Siege Island was target zero for the Imperial invasion fleet, but a last-minute feint by none other than Second Dragon Orn, High Scale of the Elder Skies, has knocked the Core Alliance off-balance. Striking from his heavily fortified base on Mount Tynavu in the occupied El Rey System, the Bloodwing commander himself is now in a position to create the first Sarn battle line stretching from Uniform Tango all the way to the Kraken Frontier.

Alliance Forces led by Captain Jocelyn Vice and the officers and crews of the battleships Bushido, Ireland and Rei Soo launch a daring counterattack in the Prairie Grove system, hoping to draw some of the empire's strength away from Rho Theta so the heavy battleship Constitution can reassemble a fighting force with enough firepower to break the Sarn lines and shatter the spacehead over Rho Theta Four.

Without warning, a ragtag Alliance squadron led by Commander Annora Doverly, Colonel Lucas Moody, Captain Dutch Holland, Lord-Captain Gael Oakshotte and the fugitive screwball pilots of Assault Squadron 808 join one of the most savage deep space engagements in human history. What happens next will echo in the halls of Skywatch Command for the next 100 years.

Meanwhile, Torrelon Zweiger and the defenders of Siege Island and Athena's Shield have their own matchup to worry about. When it is discovered Sarn, Kraken and Yersian forces have not one but two strike fleets approaching from opposite vectors, the situation rapidly goes from bad to worse. It may fall to the storied crew of the "Ghost Killer" destroyer Rhode Island and the captain known as the "Warlock" to restore the balance of power and preserve the Alliance battle station.

But the most decisive battle will not take place in the Prairie Grove system, nor will it be settled at Athena's Shield. Light years away, aboard unidentified contact Juliet Lima Six, four cadets from Skywatch Academy have discovered a mysterious woman with an even more unsettling vendetta. If what she tells them is true, Captain Jason Hunter and the crew of the battleship Argent are walking into a trap. If the four young cadets fail to warn the captain in time, both Jason and his sister may drift through an interdimensional doorway to a place from which there is no return!

Get ready! Echelon of Fire explodes into the bookstore August 18th!